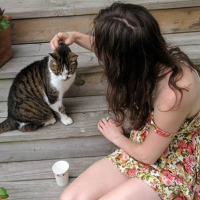 From Ann Arbor Michigan, Leah came to New York to study at The Joffrey Ballet School and The New School University. She has since danced with The Metropolitan Opera and as an original cast member of Jerry Mitchell’s hit musical “Peepshow”. Leah has performed with recording artists including Beyonce Knowles, Justin Timberlake and Nicki Minaj, in films including Across the Universe, Away We Go, and The Smurfs, and on television shows including Saturday Night Live, Gossip Girl and 30 Rock. She lived for six months in Athens, Greece dancing for their biggest pop star, Anna Vissi. Leah has been featured in Allure magazine, on the cover of Philadelphia Weekly, and on a billboard in Times Square. Leah is also a freelance writer.

Flashback: Brush Up Your Theater Lingo!

Though dance is ancient: older than speech, it is a playground for both the young and elderly. Adorning cave walls ahead of words, dance is an art both decorative and communicative–a secret code between slaves, a prayer to the gods for rain, a story played out on stage. Like any art, dance is a…

END_OF_DOCUMENT_TOKEN_TO_BE_REPLACED

"Dance Foyer at the Opera," Degas

Ballet loves a tragic ingenue: Odette, Giselle, the girl in the red shoes–but the storied lives of its early dancers upstaged the roles they played. It’s hard not to romanticize the 19th century Paris Opera–Degas sketching the feathery dancers from his box above the flickering footlights–but offstage, the lives of his…

END_OF_DOCUMENT_TOKEN_TO_BE_REPLACED

Ballet Next in "Tintinnabuli" | Photo Paul B. Goode

REVIEW: Ballet Next at the Joyce Theater

Ballet Next opened its season at the Joyce Theater Tuesday with Alison Cook Beatty’s premier of “Tinntinnabuli.” Set to Arvo Part’s “Tabula Rasa”. The piece begins on a solemn note. The audience is peering in on a dark and fearful hour. Michele Wiles prays desperately into a beam of light…

END_OF_DOCUMENT_TOKEN_TO_BE_REPLACED

Editor’s note: DancePulp would like to welcome Leah O’Donnell to our Guest contributors. We are excited to share Leah’s experienced voice with you. Every dancer has an idol. Even our idols can trace their own influences through history. As far as our family trees can be traced, so can our…